These last 2 months have been so hectic! Wow. I can barely keep up with anything, but I'm loving every second of my children's youth (= 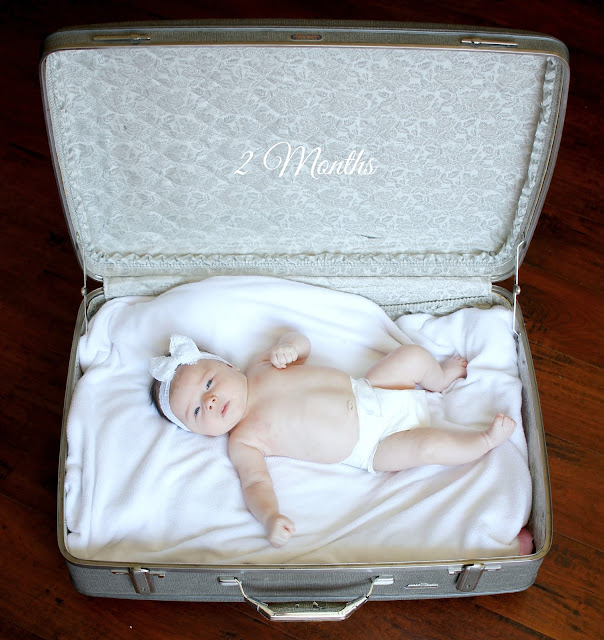 Since she was 2 weeks old, Noelani always tried to hold her head up when someone held her. It's such a big difference from how Gabriel was. In fact, she is very very different from Gabriel. Which I love but also makes me nervous. I love that everything with her is new and exciting, but I'm also nervous about everything being new and different and unexpected. Holding her head up is just one of the many things.

She loves to sleep unswaddled and so far doesn't have a hard time falling asleep in a lighted room and with sound, while Gabriel could only fall asleep being swaddled, with a paci, AND with something covering his eyes, plus we didn't have other kids at the time so he got used to sleeping only when it was quiet. 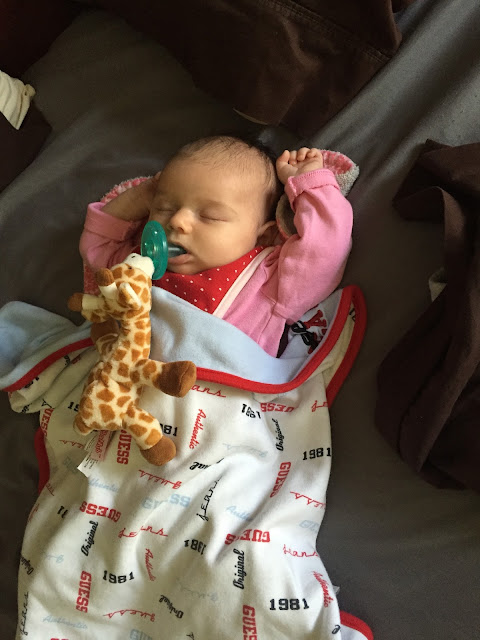 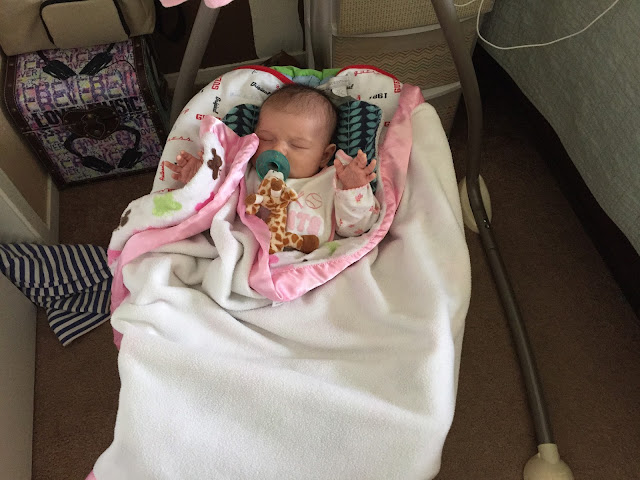 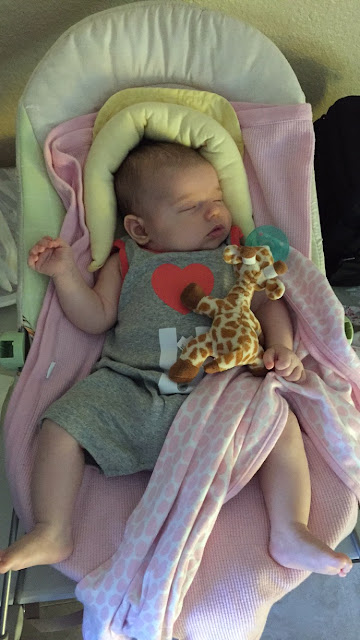 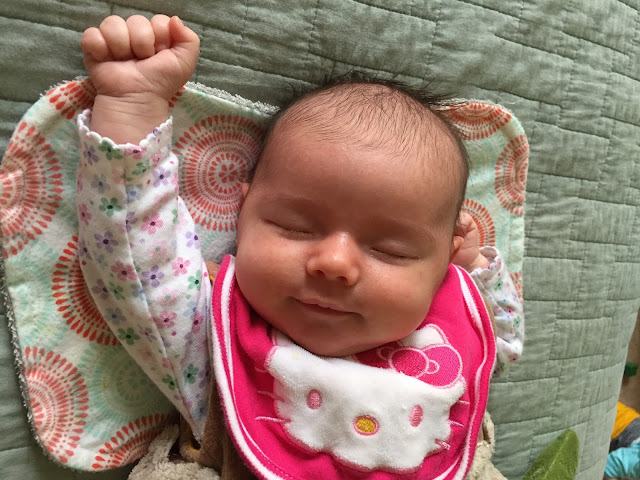 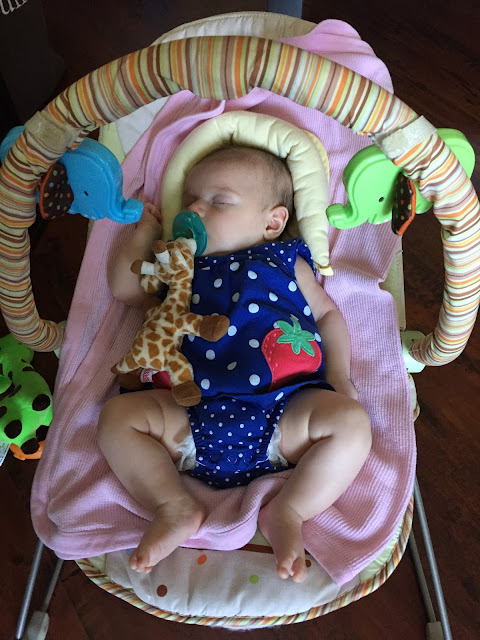 I just took this one as I was writing this post (=

Another thing is nursing. As I remember, Gabriel loved to take his sweet time nursing, but Noelani seems to prefer quick, spread out meals. Rarely does she have a 30-40 minute nursing session. She wakes up only twice (sometimes only once if I'm lucky)  during the night to eat. It's a wonder she has gained so much weight already, in fact she is beating Gabriel in the weight gaining department. She already has rolls on her thighs (which I love so much). Although she sleeps really good throughout the night, her mornings aren't the best. Starting around 4/5 am (when I feed her for the second time) she will grunt, and squirm and cry out (all in her sleep) for up to 2 hours. And all this time I'm not sleeping because I'm attempting to keep her quiet so Gabriel won't wake up too early. I used to think this happened because in my sleepy state of mind I wouldn't burp her properly after her second nursing session,  but I don't think so anymore. I'm hoping it will pass soon, because this mama can't keep waking up that early every day without naps during the day.
She started smiling and responding back to me around 5 weeks old. It was so exciting to see that, and now talking to her is so much more fun. She also seems to love to talk to different toys. I think she will be a happy baby/child, because it's so easy to make her smile.
In just the last few days, she seems to have stopped spitting up so much. Let me tell you, I am SO thankful for that. It used to be that after every feeding, she would spit up, A LOT. I literally had to change my tops multiple times a day sometimes.
So far, the one thing she does have in common with Gabriel is her hate of tummy time. I told myself that with this new baby, tummy time would start right after birth so that she wouldn't hate it, but that didn't happen. With getting adjusted to 2 kids, I hardly could remember to do tummy time. )=

I love taking photos, and it was so hard to pick out just a few to share. The last month and a half I wasn't able to transfer the photos to the HD and clear off my phone regularly, so the other day I finally ended up doing it. SO much photos to delete after, and this was JUST the photos. there are still videos to go through. 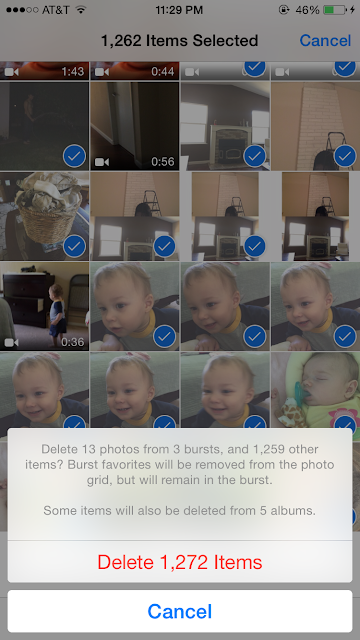 So here are just a few moments from her 2nd month (= 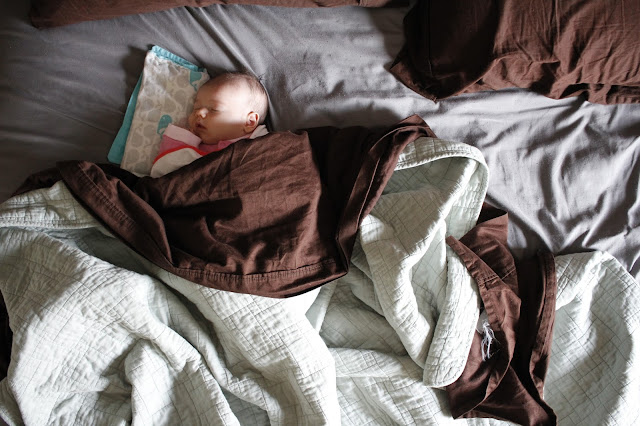 Gabriel almost never slept in our bed. First off, I thought I would squish him, and I also didn't want him to get used to our bed and then not want to sleep on his own. While I'm still trying my hardest not to make it a habit of co-sleeping, I'm more lenient with Noelani during mornings that are really tough. This was one of those mornings, after she finally fell into a deep sleep. 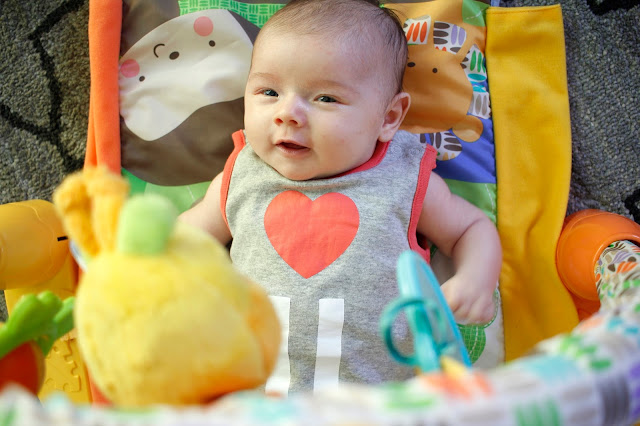 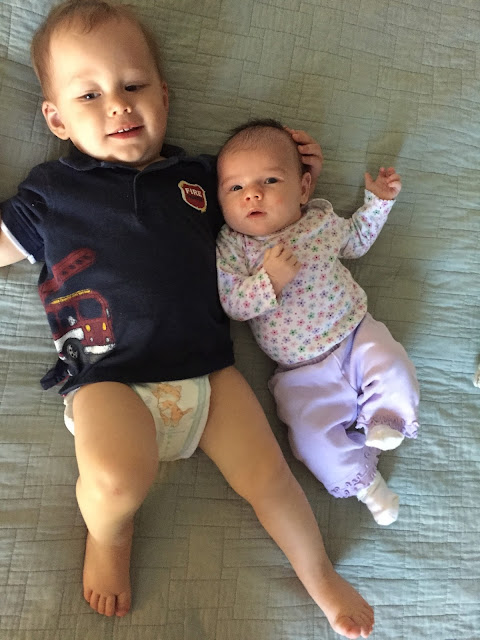 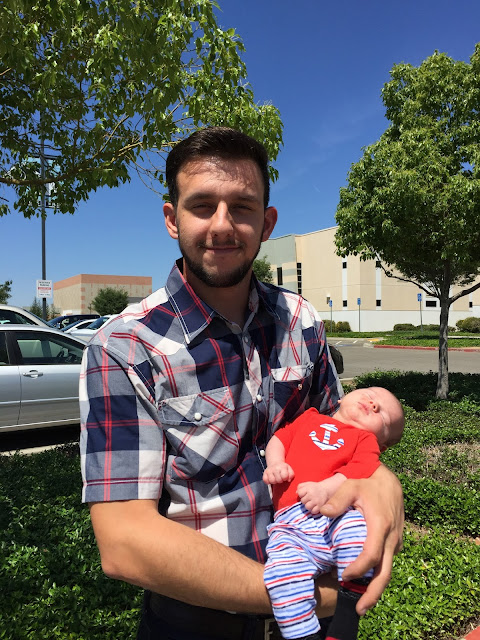 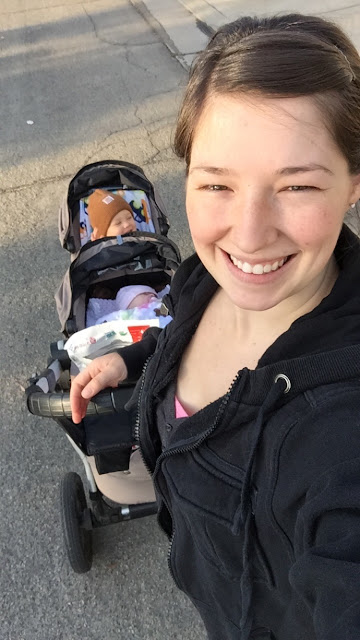 Going on a walk. It's probably weird to see them so bundled up in fresno, but this was a chilly day, and I admit, I over did it a bit (; 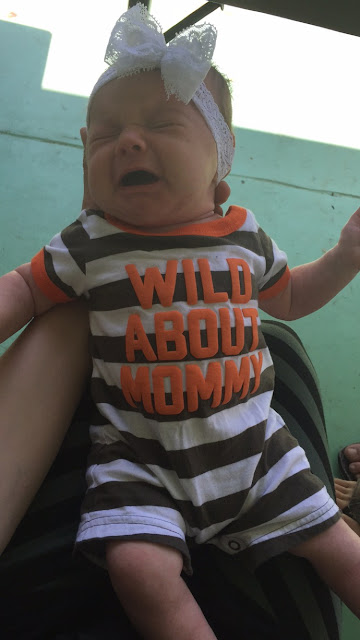 Mother's Day (= not to happy 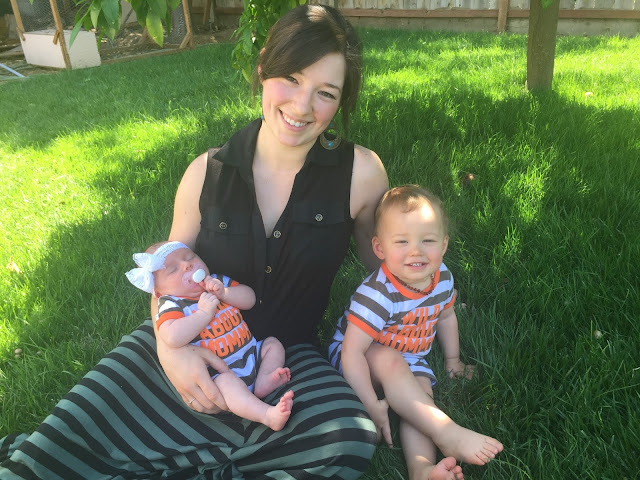 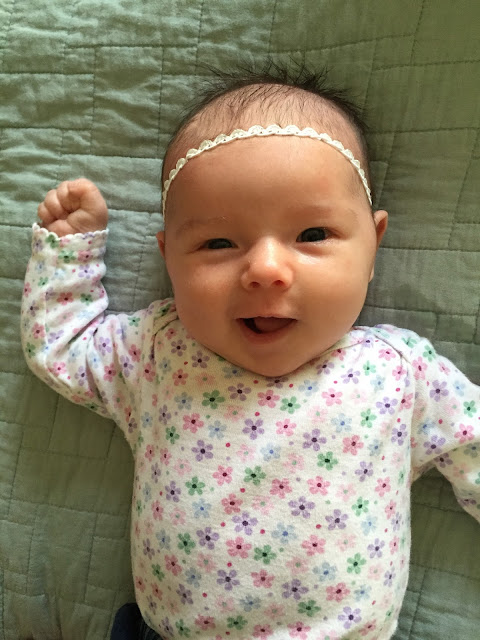 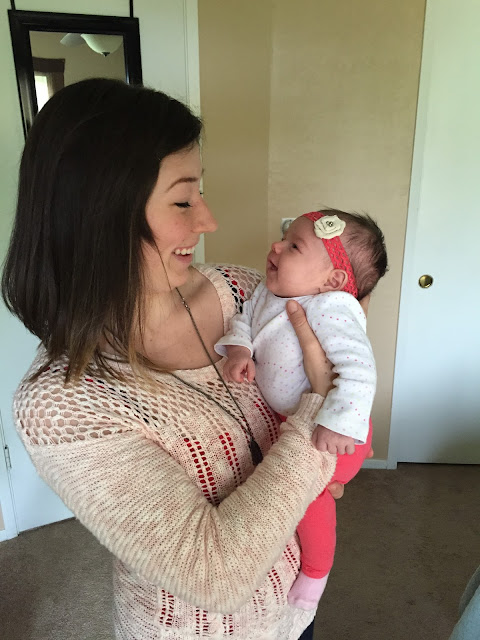 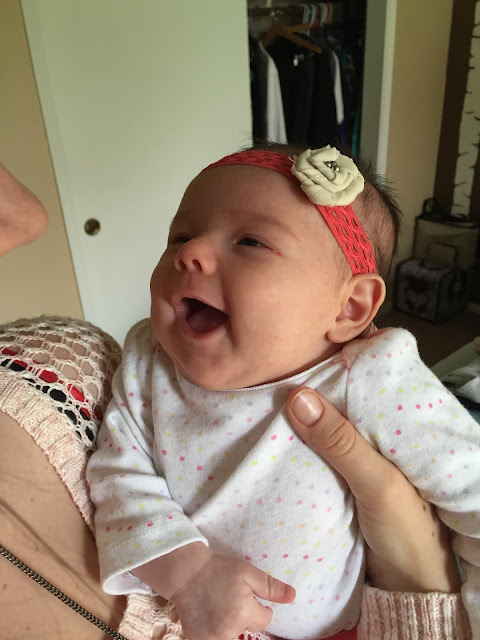 I love her smiles =D 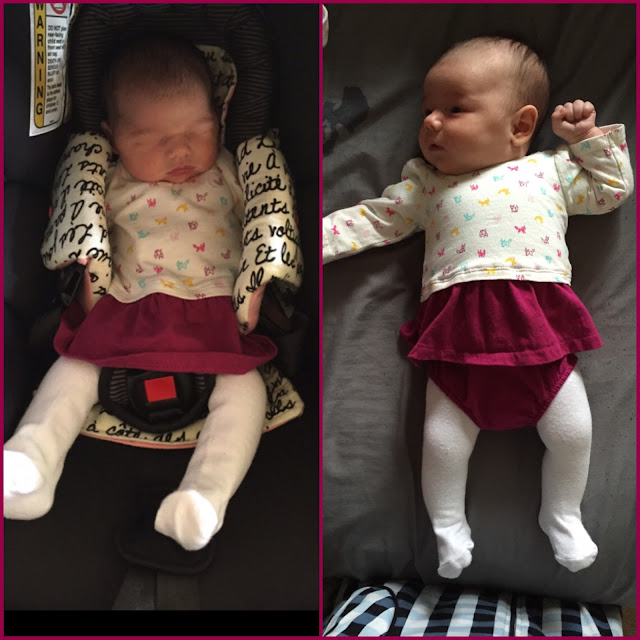 This was her "Going Home" outfit. 1.5 months later she couldn't fit into it anymore. 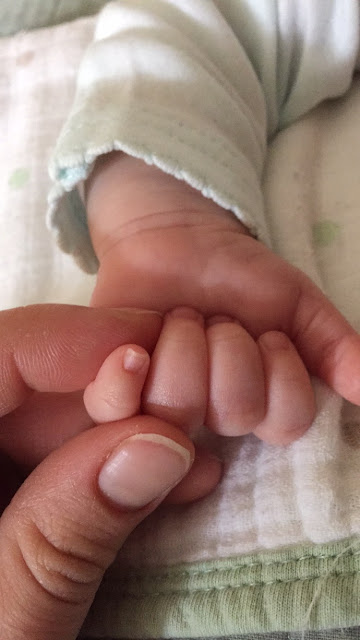 Tiny fingers and even tinier nails 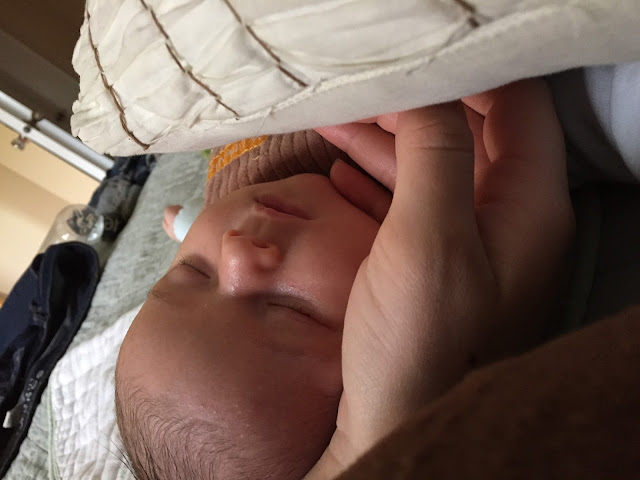 There is a story behind this photo. On one particularly tough day (I got very little sleep and was super tired during the day) I put Gabriel down for a nap and decided to attempt to take a nap with Noelani. Well that didn't work. I got a few minutes of blissful quiet (during which I snapped this photo) but then Noelani started squirming and wouldn't stop for a long time. Finally after she calmed down I was almost asleep and the doorbell rang. Once I answered it Gabriel was already up from his nap. So no nap for me. 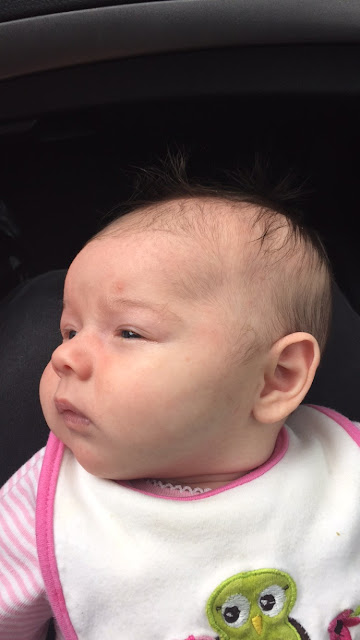 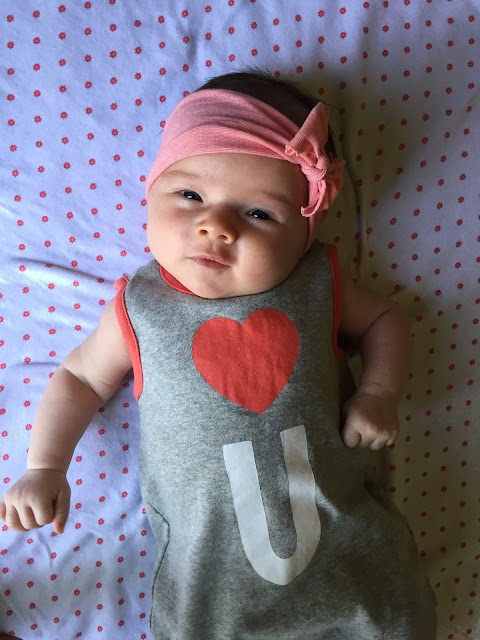 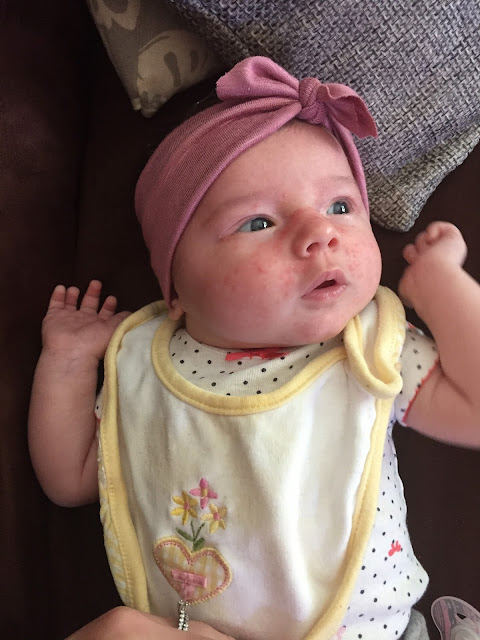 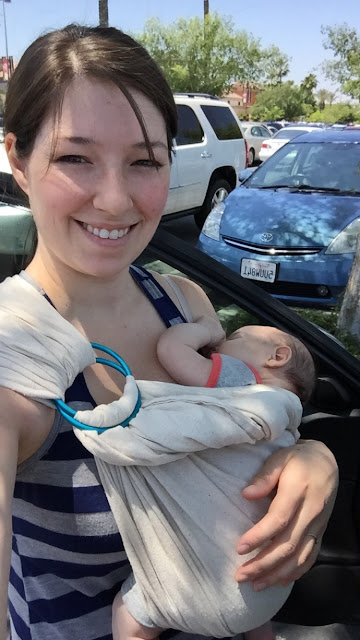 I went to Carter's on memorial day to get a few necessities. For a kid's store they aren't very kid friendly. The store itself doesn't have carts (only mesh bags) and in the store everything is so close together that you can't go through it with  a stroller, unless its an umbrella one (trust me, I tried). So knowing all of this I came prepared. Although after carrying an 11lb baby on my shoulder, plus the baby bag AND all the baby clothing wasn't fun. I had a sore shoulder for a few days afterwards. 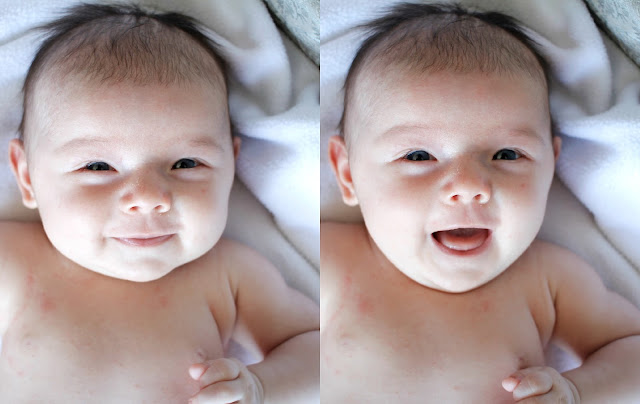 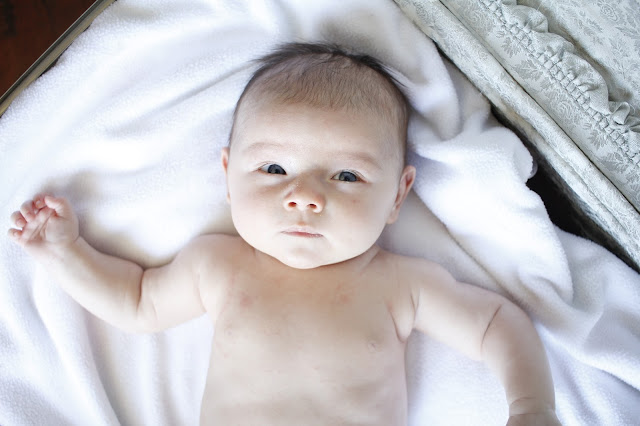 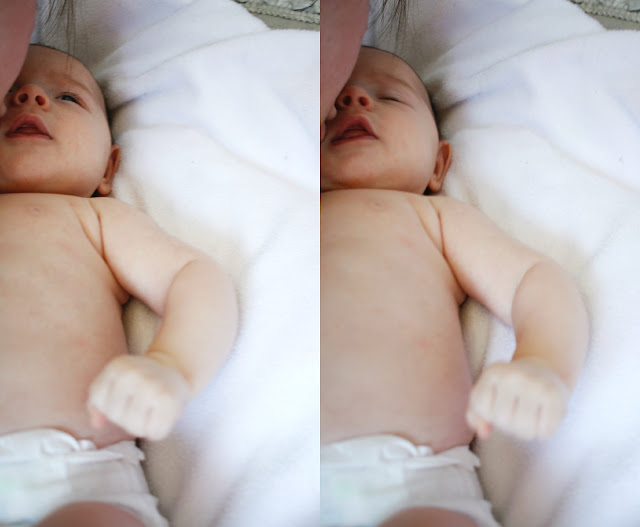 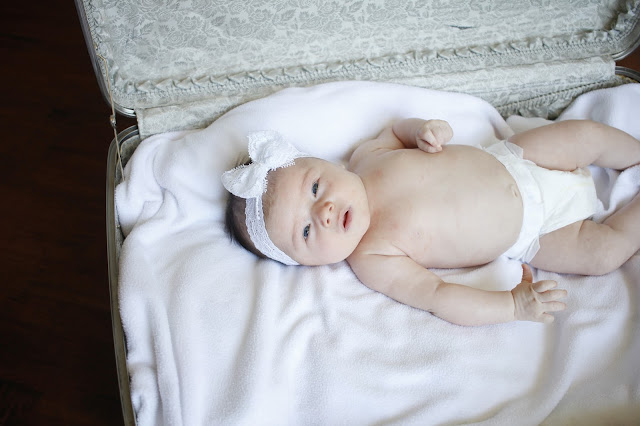