Shiloh is 2 Months + Her Birth Story

If you're here just for the birth story, scroll down to the end (= 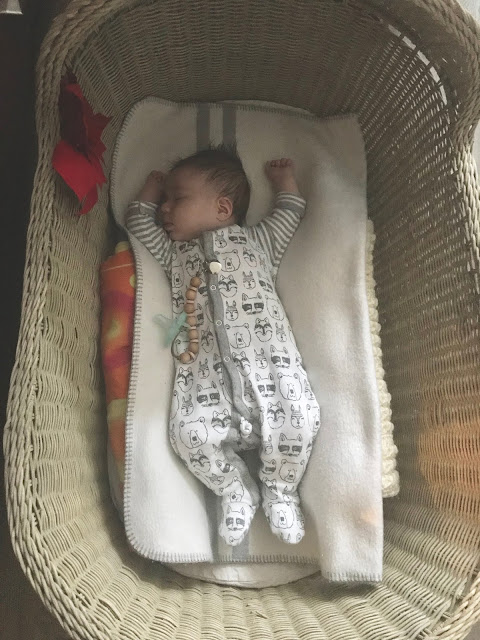 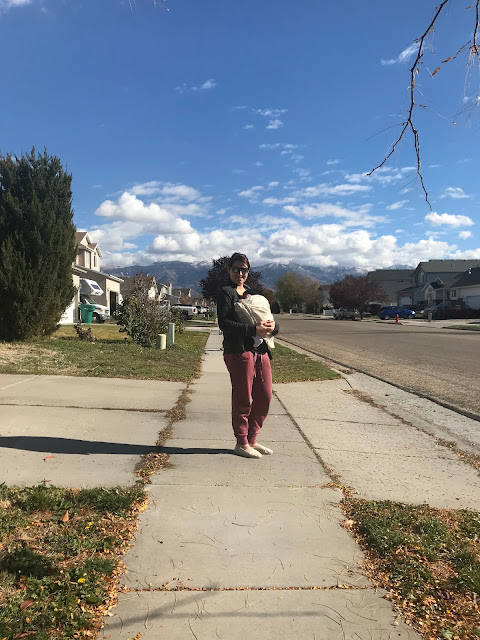 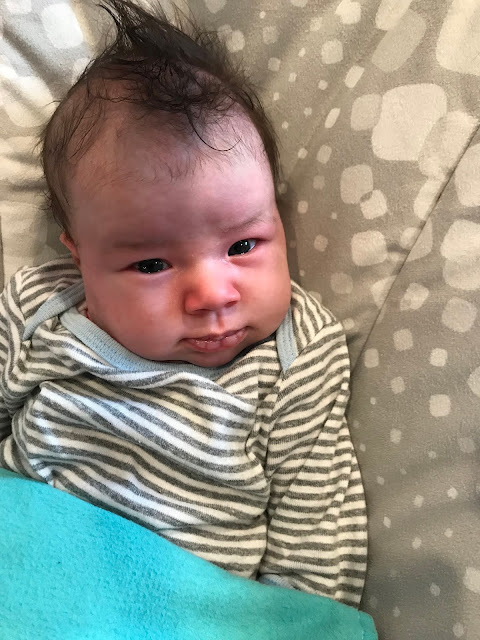 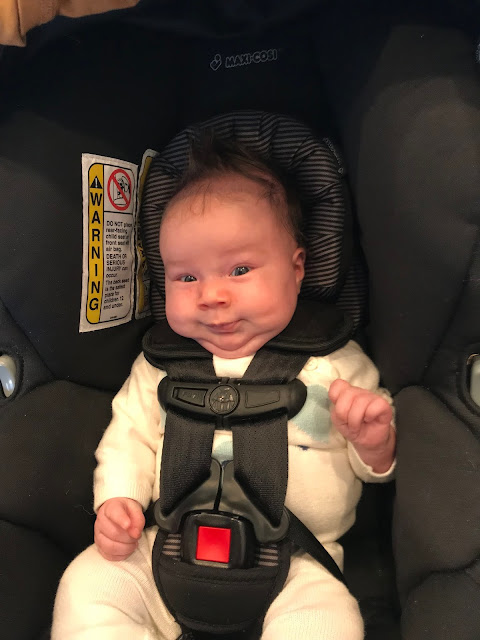 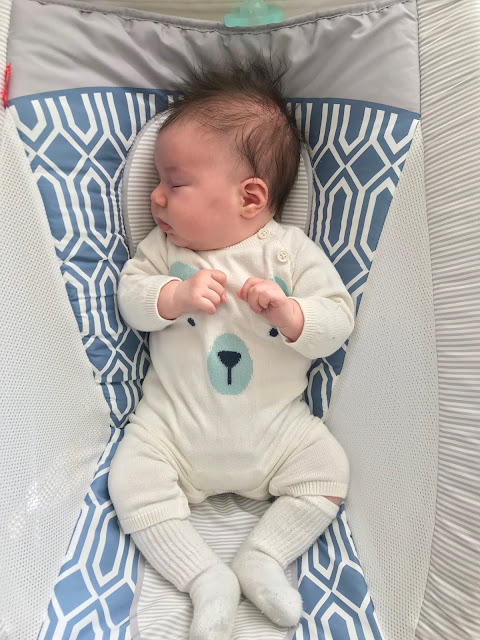 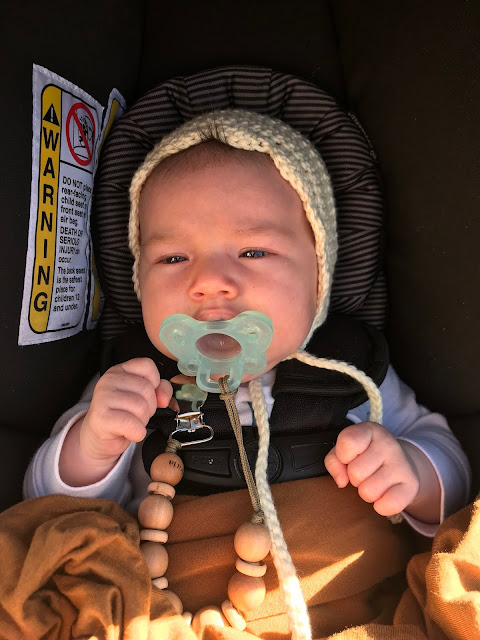 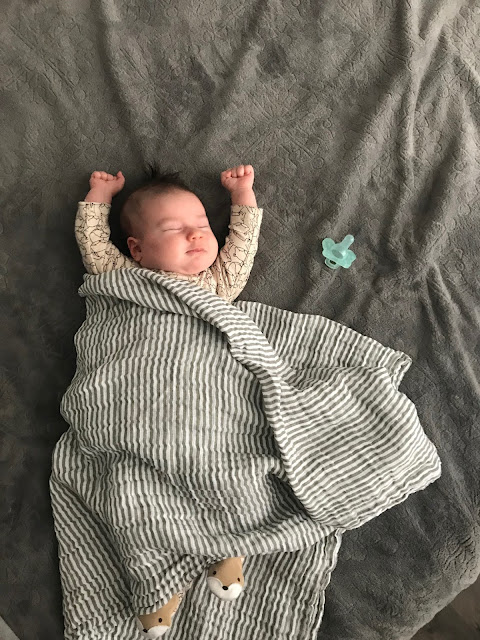 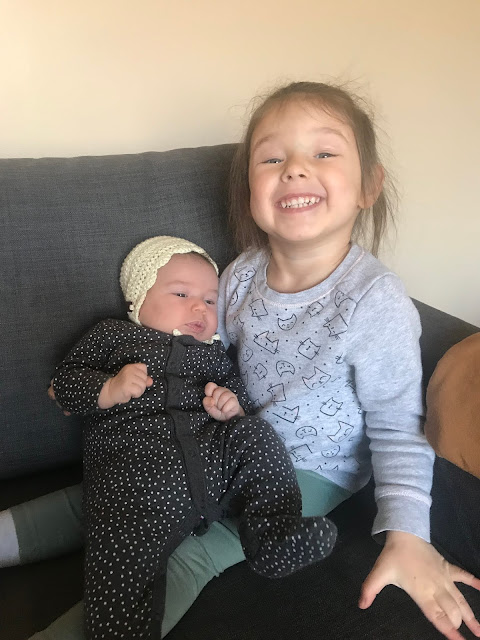 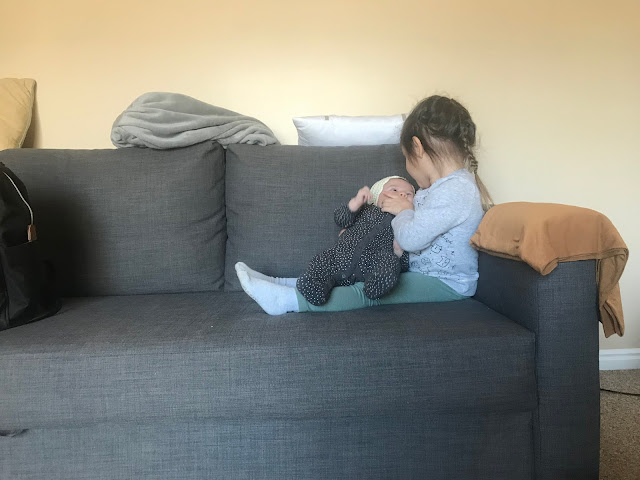 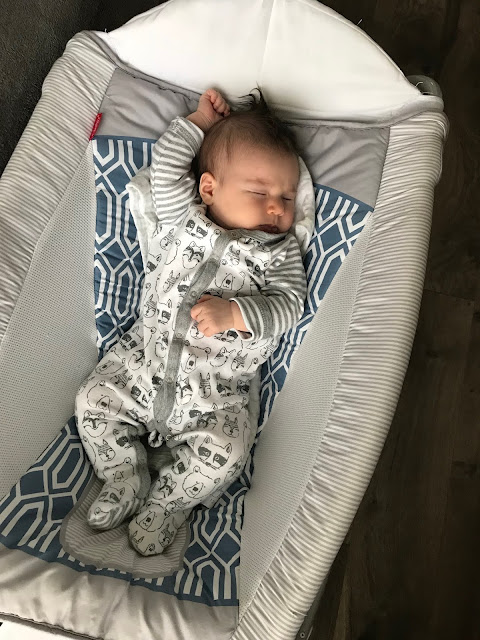 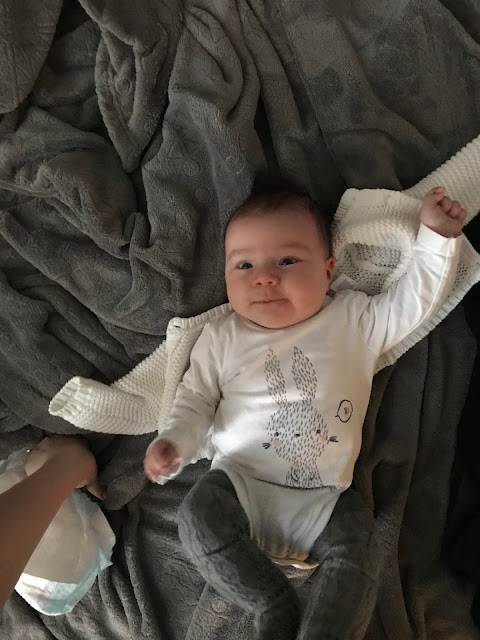 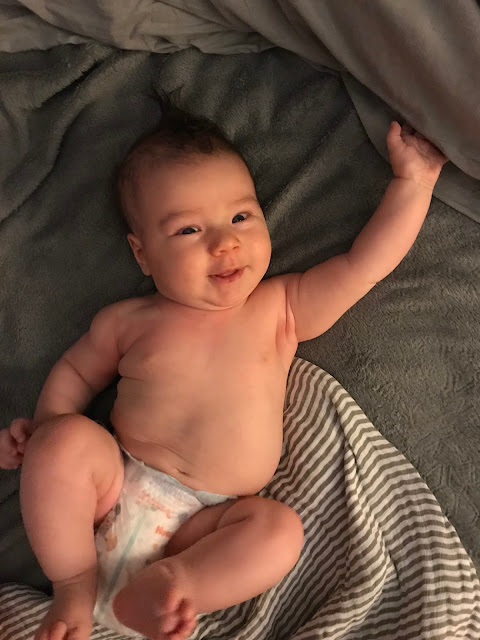 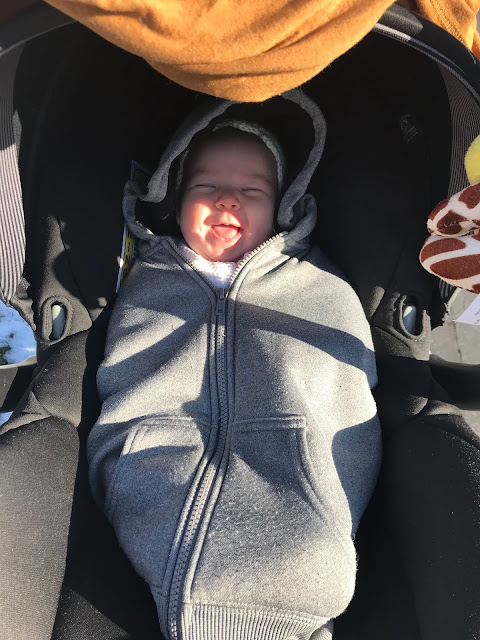 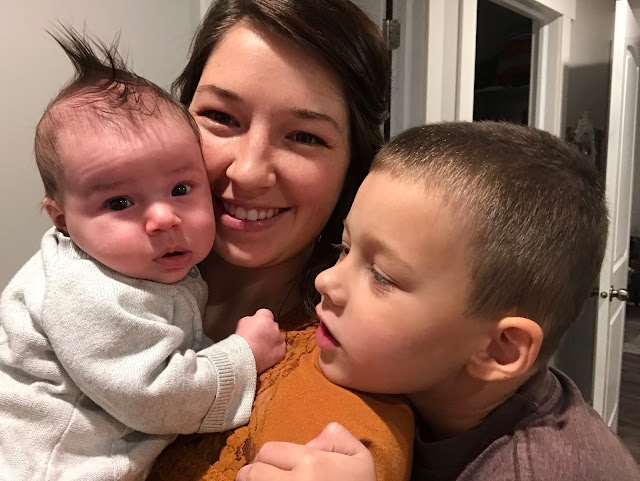 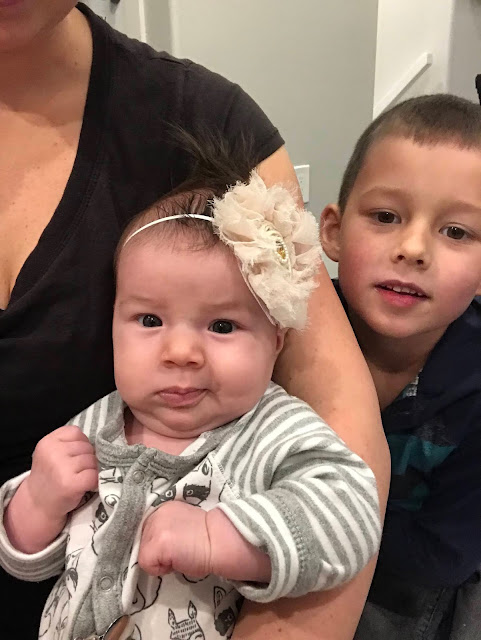 So it's about time I wrote down Shiloh's birth story. She is now 2 months old and I'm already forgetting some details from the night of her birth.

Early morning of October 1st I woke up because of some pretty regular contractions. I was 41+3  into my pregnancy at this point. The contractions weren't painful but I couldn't sleep through them either. After about an hour I decided I should start timing them. They were about 15 minutes apart. By the time my husband was supposed to get up for work, I was pretty sure this was the real deal and not just Braxton hicks. I asked my husband not to go to work just in case things went quickly. As we all got up and ready for the day the contractions stopped. I haven't had that happen in my previous labors, so this was new territory for me. I had a gut feeling that this wasn't a false alarm, but maybe it would be a slower labor since I had prayed for a slower labor this time around (you can read about my previous 1.5hr labor here). We decided to go for a walk and see if that would start the contractions up again. As I walked, the contractions did start up, but when I would sit down or lay down, they stopped.

As the day went on the contractions were irregular so I stopped timing them and stopped paying much attention to them. The birth of my previous child (also home-birth) was during the night so throughout this pregnancy, we prayed and hoped that this baby would also be born during the night. This way we wouldn't have to worry about sending the older children to someone else's house.

A little after 6pm that evening, as I was making dinner, I realized that my contractions were pretty regular & seemed close together. I started timing them once again and they were once again 15 minutes apart. We went about our evening. Kids ate dinner, we got them ready for bed, and that's when things started to progress. The contractions were now 5-10 minutes apart & getting noticeably more intense. I was walking around during each one to help me stay relaxed. Finally, when the kids were in bed I felt relieved, knowing that they wouldn't be awake for the birth of their baby sister. My youngest (who was 2years and 2 months old at this time) has been very attached to me ever since he was born. Often times he would want me to lay next to him while he fell asleep at night and today was one of those evenings where he wanted mama next to him. I remember kneeling next to his bed, my face really close to his, trying to rock through each contraction. At that moment I had a thought about taking a photo of him falling asleep, to remember that last moment of him being my youngest baby, but I didn't. Now I regret not taking that photo.

After a few contractions, I could no longer be in one spot like that. The kids were almost asleep now so I went upstairs to relieve some of the tension by getting into the bath. At this point, my contractions were still 10-ish minutes apart & lasting not quite a full minute. Shortly after getting into the tub my husband decided it was time to start filling up the birth pool. I wasn't sure it was time yet, but I'm glad he took the lead on this one. If we had waited any longer to start filling it up, I wouldn't have gotten my water birth.

At 8:50pm I texted my midwife to start driving out to my house. She lived about an hour away. Hindsight is always 20/20 and I probably should have suggested earlier on in the day that she drive out and hang out somewhere close by while I labored at home. Somewhere around 9:10pm I went from my bath tub full of lukewarm water to a spacious pool full of hot water. And let me tell you, that hot water felt so amazing! People have told me previously that hot water during labor is like a natural epidural. I've never experienced birth with an epidural, but getting in that water took so much pain away. Not all, but majority of it definitely went away.

My contractions were now 3-5 minutes apart and some of them were lasting longer than 1 minute. It was getting really difficult to breathe through each one and not allow my body to push. After a few hard contractions, I could no longer stop my body from pushing. That's when my husband called the midwife to have her walk us through it. After the transition, it took 3-4 contractions for baby girl to be born. The first one I could feel her head coming down the birth canal & then going slightly back up once contraction was done. Even though I have read about this & knew it was just the normal part of the process, I'll admit it was still a little scary in the moment. Logically I knew beforehand that this is what happens as the baby descends, but when you're in labor you don't think "logically". There are a lot of emotions and hormones at play. It's almost as if my body was taking 2 steps forward in the process & then 1 step back.

On the second contraction I felt her crowning. With my previous birth, my midwife told me to reach down & feel my baby crowning but I didn't because I thought it would add to the pain. Later on, I regretted not doing it so this time around, one of my goals was to overcome my fear & experience that. Crowning was probably the most intense part, but I'll say that feeling her crown didn't add to the pain. The next contraction her head was out & I'm not sure if I waited for another contraction to push her body or if I just pushed without a contraction. Once she was completly born my husband reached down into the water & grabbed her, handing her to me. I pulled her out from under the water & onto my chest. She didn't scream like you usually see in movies and actually barely cried. In a few minutes, the midwife's assistant came & after quickly checking Shiloh, she helped me deliver the placenta. And that was when all the post-birth fun began haha but I'll spare you those details.

Pregnancy and birth is such an amazing journey. I think this last pregnancy, I really meditated on just how amazing my body is created. I never gave it much thought until I started learning more about different things that happen to a woman's body during the process of pregnancy and birth. It really amazed me at just how wonderfully God created our bodies. I got to carry another life from the very beginning, during it's most vulnerable time. If it wasn't for my body, these tiny lives that I've carried would not have survived. Reading & listening to information about all of this pointed me back to my God who fashioned my body to work in this way. And to think, that as humans, we don't even know everything that goes on during pregnancy and birth. It's humbling and honoring all at the same time.
Posted by Unknown at 9:25 PM