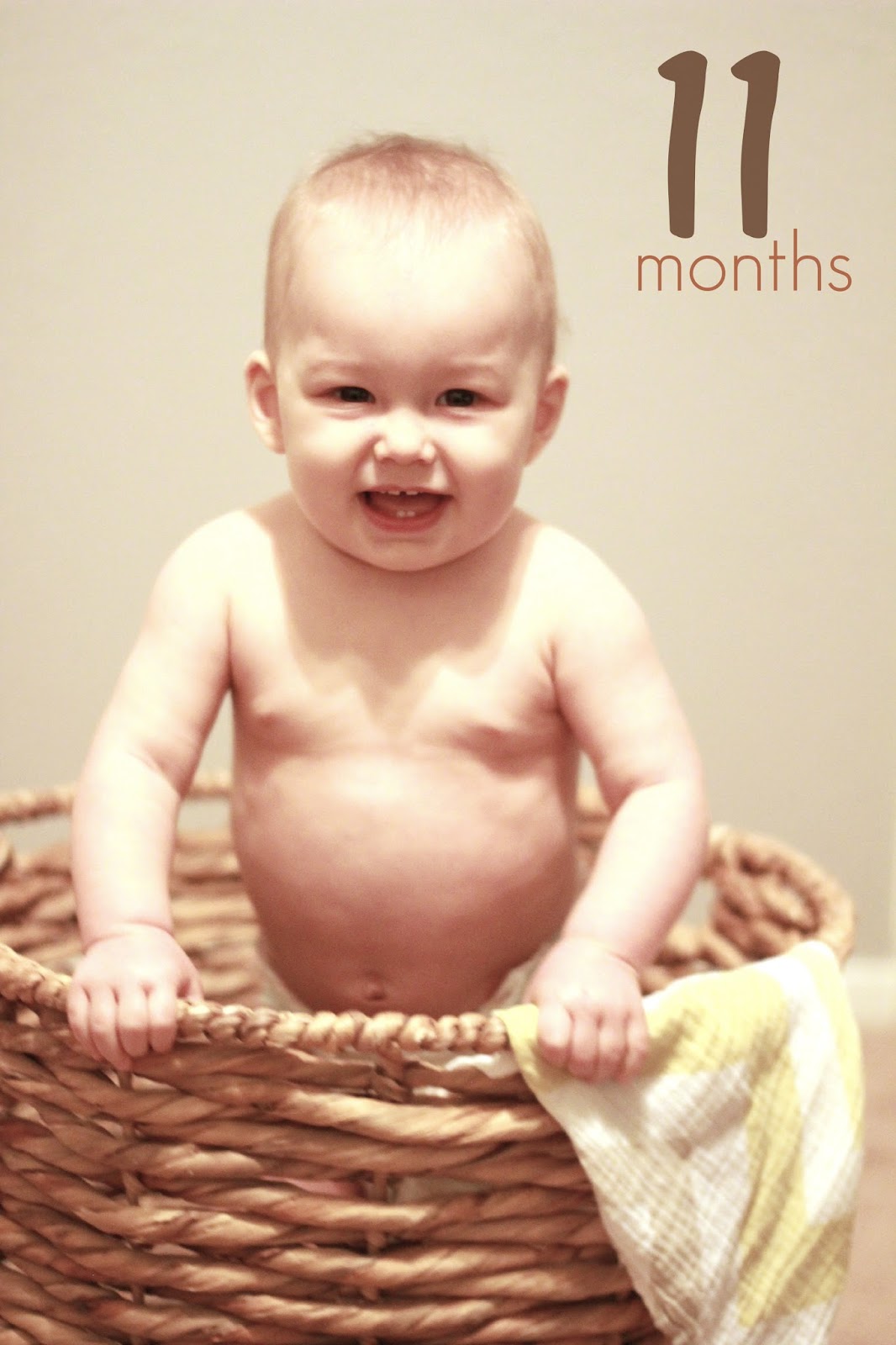 weight:  23.6 lbs
height:  n/a
wears clothing size: 9-12m or 12m
Teeth: 7!! plus 1 more trying to poke through
Hair: light brown/blond
Standing: yes, if he holds on to something/someone
Walking: not yet, unless you hold his hands or drumsticks
Talking: Yes!! haha he seems to LOVE talking in his own little way lately
Solids: Yes
Sleeping: sleeping has been normal. still sleeping through the night. Our naps have switched from 3+ naps a day to 2
Cute moment this past month:  Gabriel was laying on the floor, and David walked by and accidentally, lightly pushed him with his foot. Gabriel started fake crying, sat up and extended his arms towards David to be picked up. It was the first time he has ever done something like that (=

Some more info: A little late on the update, but better late than never (; . A few days after Gabriel's 11 month date we saw that he has 2 more teeth poking through on the bottom, so I went ahead and added them to the update.
One very big noticeable change in him is that he has started to talk (in his own babbling way) A LOT.  Every morning when he wakes up, he starts talking until I come get him. Also whenever David is telling me something, like during dinner, Gabriel will start talking too. He uses a lot of hand gestures also while talking.
Since he will be turning 1 at the end of January I decided to switch him to 2 naps a day. Before, he would wake up anywhere from 7:30-9 am each morning, and I would put him back down for a nap between 9:30 (if he woke up earlier) or 10. After the first nap, his other naps were always random and whenever I felt he was getting sleepy, or crabby, or needed a nap. Sometimes his naps would only be 30 minutes long so I would have to put him down for a third and then sometimes even a fourth nap during the day. On days when I was home all day it wasn't too bad that he had so many short naps. Although it got hectic with our potty routine before and after each nap. But on days where I had to run errands or we were going out somewhere, it was pretty bad. That's why I decided to switch him to just 2 naps a day. First one at 10 am and second one at 3 pm. I've been doing this only for a couple days now, and am still trying to get our routine to 10 am and 3 pm, so I can't really tell you how its been.
Lately getting Gabriel to sit still during church has been very hard. He was always a pretty calm baby so we were able to sit through our 1h 15m church service with no problem. But this past month he has becoming so squirmy and energetic and interested in EVERYTHING around him that having him sit through the whole church service is almost impossible.
We are still keeping his food somewhat different then ours. His morning meal consists of organic oatmeal and some pureed fruit from a baby food jar. Lunch and dinner are always different from day to day. If what we are having for dinner is "baby safe" (organic, not fried, not too spicy, etc.) then we give Gabriel that food also. I'm waiting until he is 1 to introduce more of "our" food into his diet. I'm pretty excited for that switch, because it means I wont have to make 2 separate meals for dinner.
Gabriel LOVES his dad. It even seems like he prefers his dad over me. Whenever David comes home from work, Gabriel gets SO excited to see him. Also whenever David leaves the room, if Gabriel isn't occupied by something, he will start crying and crawl after him. If I'm holding him and David is close by,  Gabriel will pull towards him and want to be held by him.
He is an over all happy baby, who LOVES other babies/children (=

A little bad quality, but heres some photos from this past photoshoot. 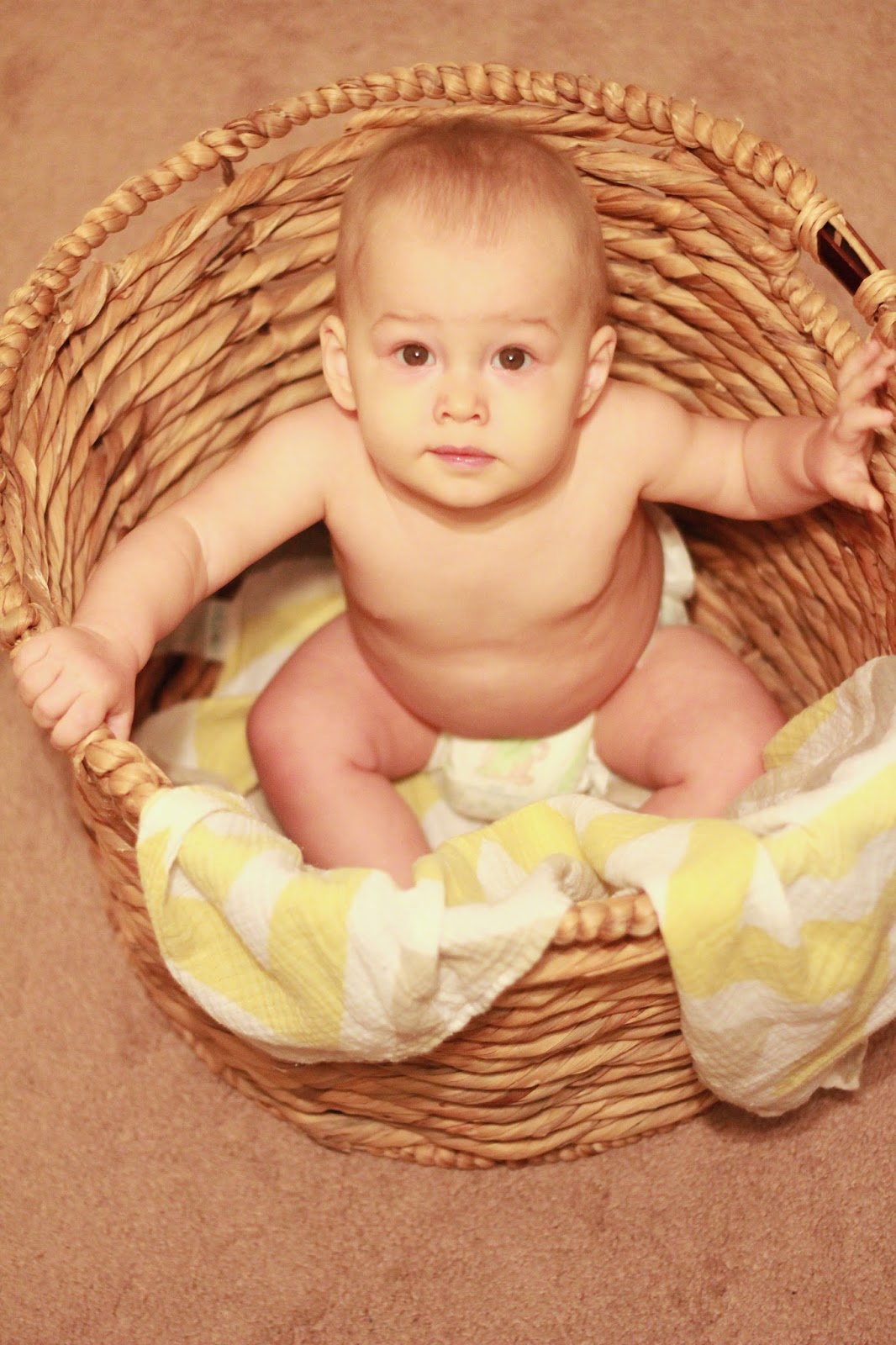 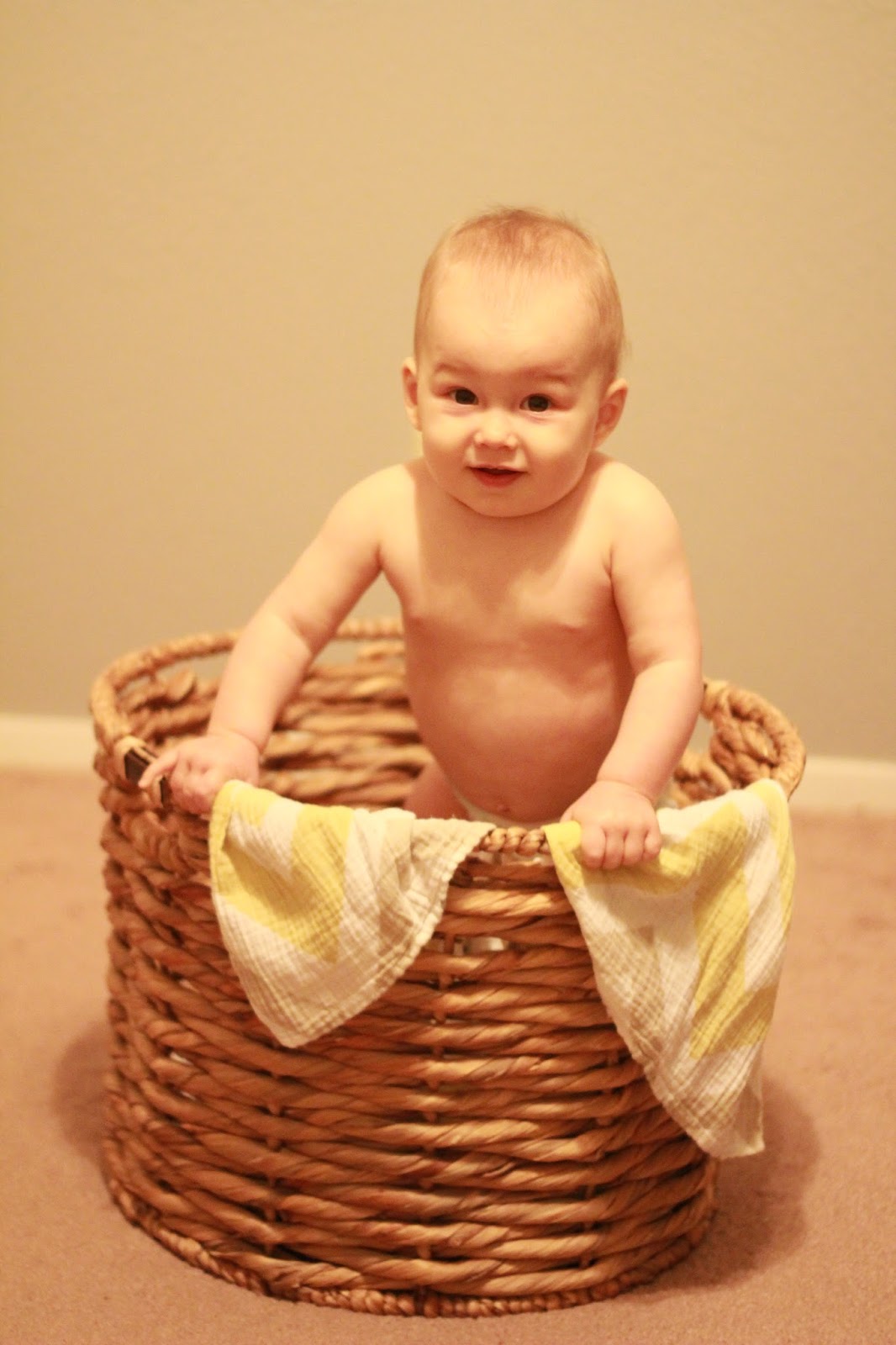 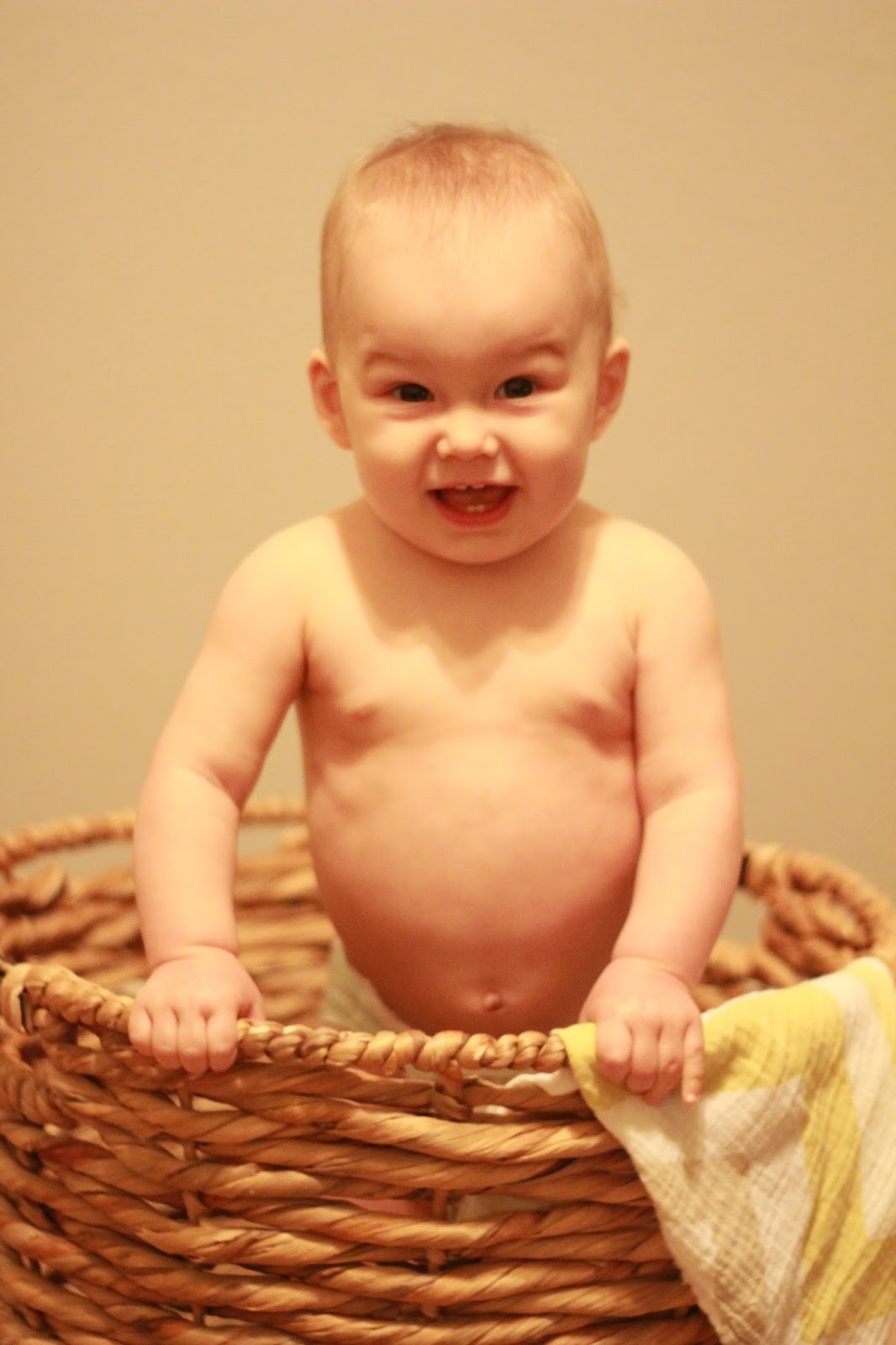 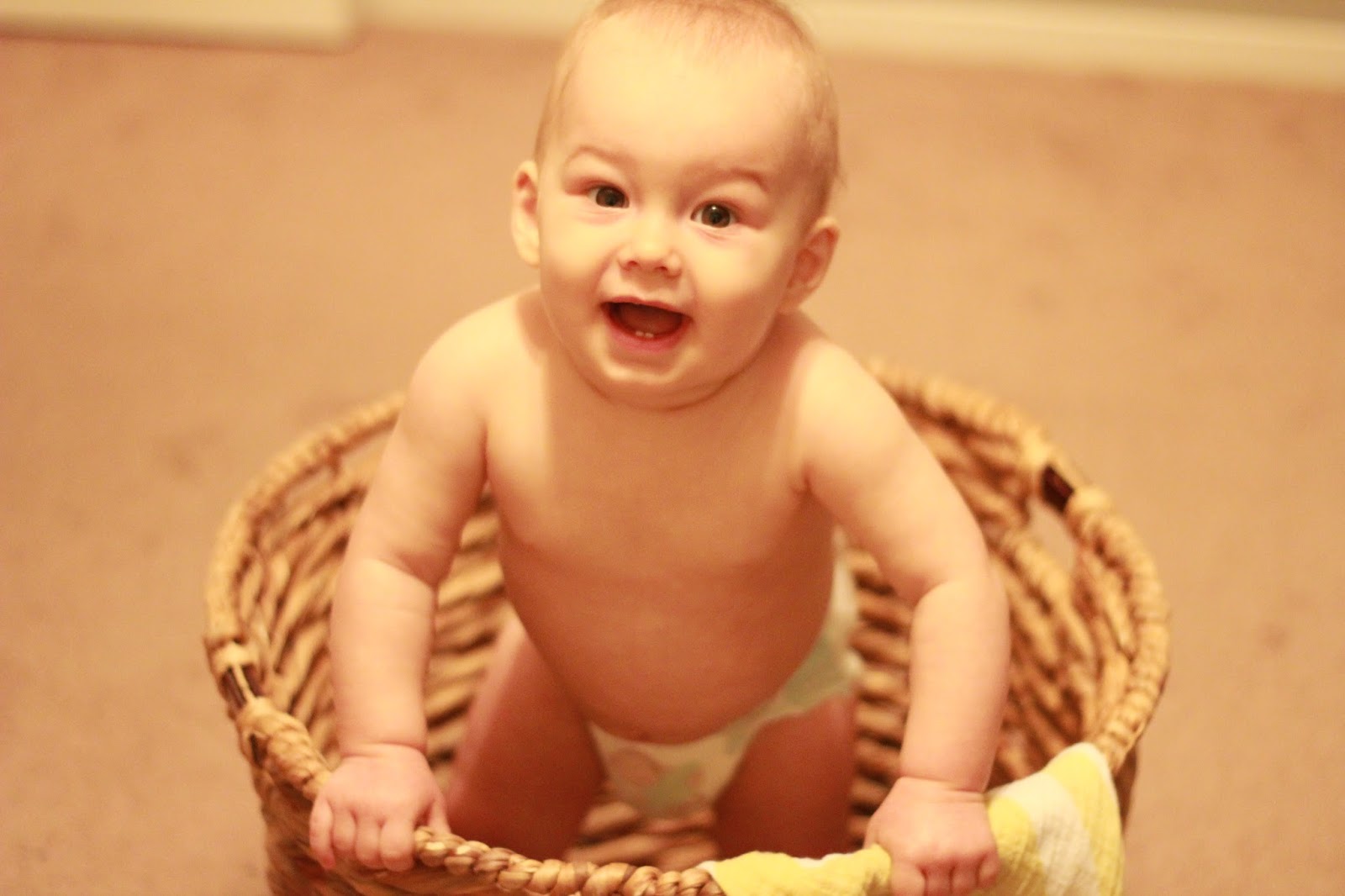