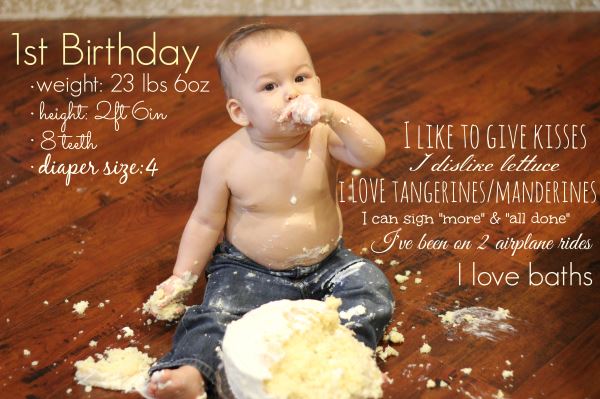 weight:  23.6 lbs
height:  2' 6"
wears clothing size: mostly 12m with some 12-18m and 18m
Teeth: 8
Hair: light brown/blond and starting to curl just a little bit (=
Standing: yes, but for a short time
Walking: not yet, unless you hold his hands or he is holding on to something (couch, table, etc.)
Talking: Yes!! This guy LOVES to talk. Anytime I'm on the phone, or David is talking to me, Gabriel just starts babbling in his own language trying to out talk us
Solids: Yes
Sleeping: Sleeping is still going good (= naps are mostly 2 times a day, unless he is sick, or the day is off.
Cute moment this past month:  One of his uncles was over and was using his laptop. Gabriel seems to have a pull towards technology, even though we try to not let him get into it. Well as his uncle was sitting on the floor doing something on the laptop, Gabriel crawled up to him and started touching the laptop. I was sitting on the couch and as Gabriel started touching the laptop I told him "no". He turned to me and started babbling as if trying to explain something and pointing at the laptop screen. It was the cutest argument I've ever seen, and it was SO hard to keep a straight face and keep telling him no as he would attempt to touch the laptop.

Some more info: We are parents of a 1 year old. CRAZY! I know, there are parents out there who have older kids and think were weird haha but it is all new to us, and the year passed by so fast. Gabriel's crawl has improved, he no longer "army crawls" but uses his hands instead of his elbows. He is a lot more mobile when it comes to getting around. He seems to be able to get from one side of the room to the other so quickly. Another thing he does is crawl really fast as if someone is after him. Like if he is in the room quiet and i call him, he will drop whatever he is doing and start crawling away, as if he was caught doing something bad. He has been having more of "our" food instead of food i prepared specifically for him, but I still try to make food that is more baby friendly, like soups, or not so spicy meals. We've been fighting a bug in our house the past couple days, and today was Gabriel's day. Even though he couldn't keep any food down, you would never guess that he was sick. He was as happy and cheerful as any other day.