How is it that my baby boy is already a year and a half?! I remember when he was just a few months old, people kept telling me that it will all fly by so quickly. I didn't believe them because it didn't seem to fly by at the time. Days seemed to drag for me as a new mother. The next thing I knew, he was already a year old. After his little sister was born, the months are just flying by. Days go by so quickly with 2 under the age of 2. Between diaper changes, feedings, play time, naps, baths, and so on, there is really no time (except after both kiddos are down for the night) to sit back, relax and reflect on my children getting older.
Even before Gabriel was born, I had the mentality that my kids were only on loan to me for a short 18 (or so) years. They aren't technically mine. They are God's children, loaned out for me to love, nurture, raise, discipline, and teach them their depravity and desperate need for Christ's redeeming blood. Gabriel is only a year and a half, and I've already imagined him either going off to college or getting married. I think once that time comes it will be so hard on me. Even though I completely understand that's how life is, and that's what awaits me, my heart can't handle it at the moment. I'm glad I have a many more years before those big changes.
Almost every night, when we pray before bed with him, I pray for God to cultivate his little heart to come to a point in his life where he realizes how big of a sinner he is, and how much he needs Christ. My only wish is for all my children to somehow glorify The Lord with their lives. Whether that means they come to Him early on in their lives or later on, may God ultimately be glorified.


Here's a little update on our little man...

This little boy is SO energized! From the moment he wakes up, he is ready to go run around and just get into trouble (= I'm looking forward to the days when Noelani can keep him company and I'll have more free time for other things. He has a pretty strong will, especially when it comes to Noelani's pacifier. No matter how many times we've told him not to touch it, and no matter how many times we've disciplined him, he still goes for it as soon as he sees it.
He loves getting into everything and anything that's not toy related. Grandma's cupboards, Dad's tool box, Mom's sewing box and so on. Although he has plenty of toys, he prefers anything else over them. Just today, for the first time ever, he drew on the walls with a pencil. Luckily it was only pencil! He is definitely a mischievous little one. He loves water. Bath time is probably the most favorite part of the day for him.
We have switched over to only 1 nap a day recently. Still trying to make it longer then 1.5 hours, but at least he isn't cranky in the evenings anymore (=  I'm so thankful that he got his sleeping habits from my husbands side of the family. He sleeps great through Noelani's whimpers at night. I just wish he would sleep past 7/7:30am. Going to sleep is either a hit or miss. Most nights its a hit. But we do get an occasional evening when he will just keep fighting going down for the night.
He is very friendly, and loves other kids, but he doesn't know his own strength just yet. Sometimes when he gets excited, he will jog in place and then out of know where push whoever is next to him. We have been trying to teach him to express this excitement through a hug rather then pushing (= He definitely loves his little sister also. There will be random times when he will come up and kiss her, or hug her, or attempt to take her from my arms. I think as she gets older, she will enjoy playing with him. The affection is reciprocated (=

Gabriel just recently learned how to get on this swing himself and somewhat push off. It's low to the ground, so he is able to get on, and also if he falls off, its not painful. He just needs to learn to keep his feet up when he is swinging forward 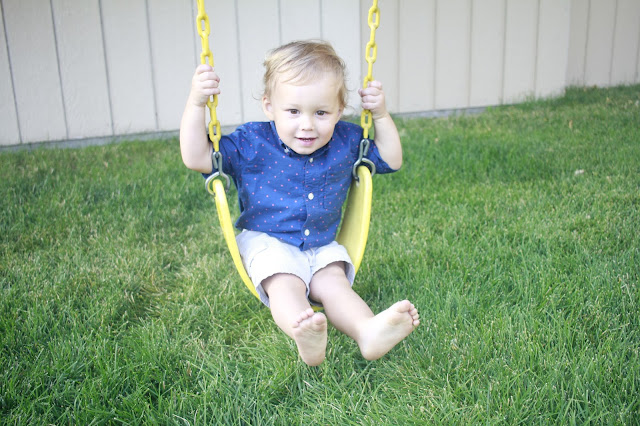 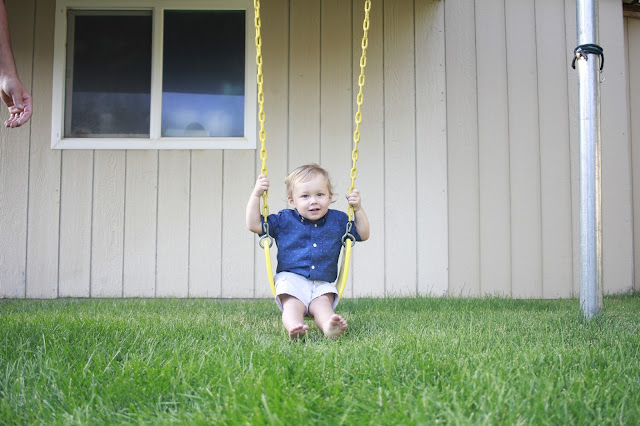 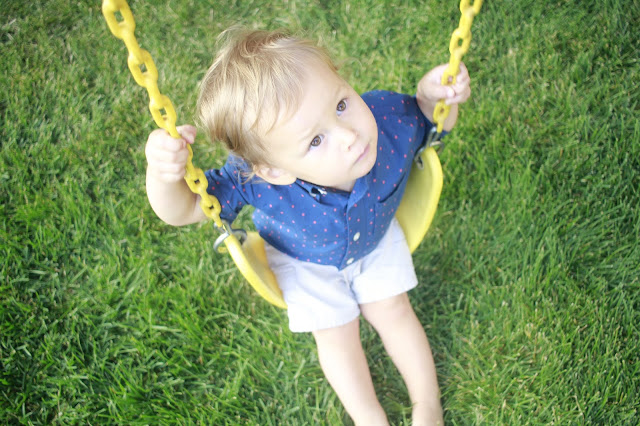 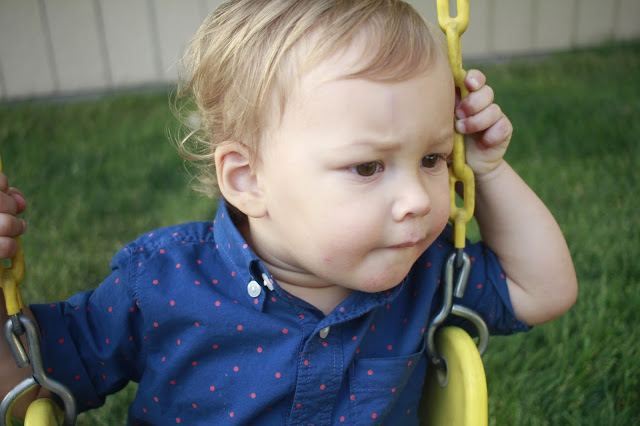 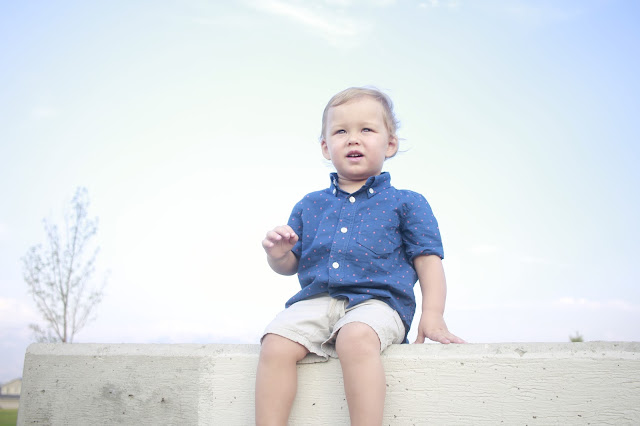 Measuring tapes are his #1 toy. This started a while back, when we lived in California. My husband was remodeling our home and Gabriel would see him using the measuring tape often. Being a daddy's boy, he wanted to be just like him and started picking up the measuring tape and copying David (= 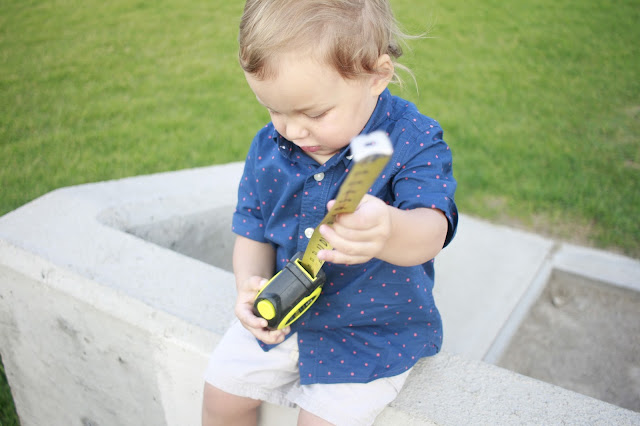 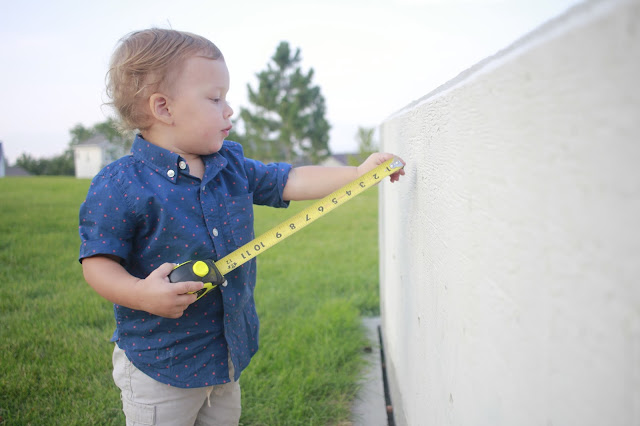 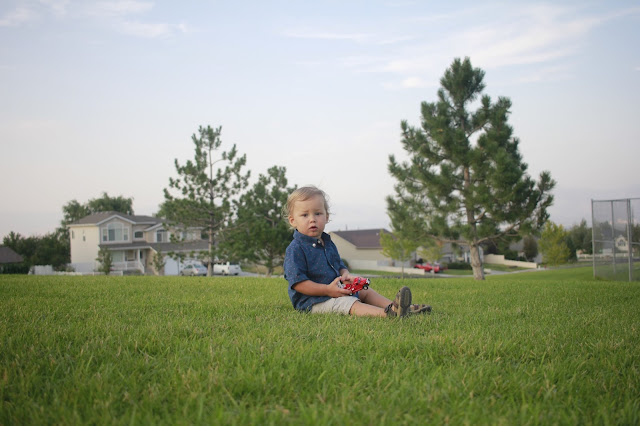 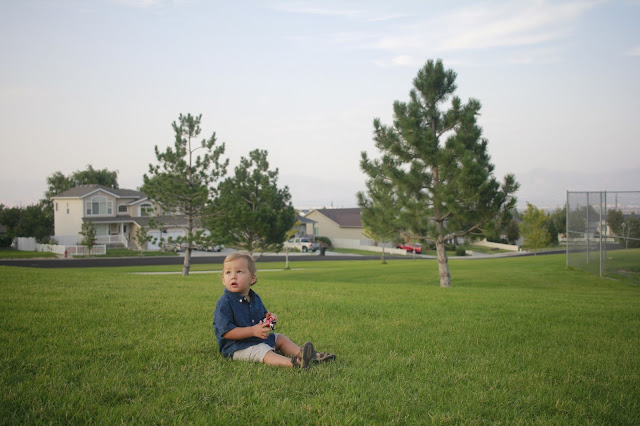 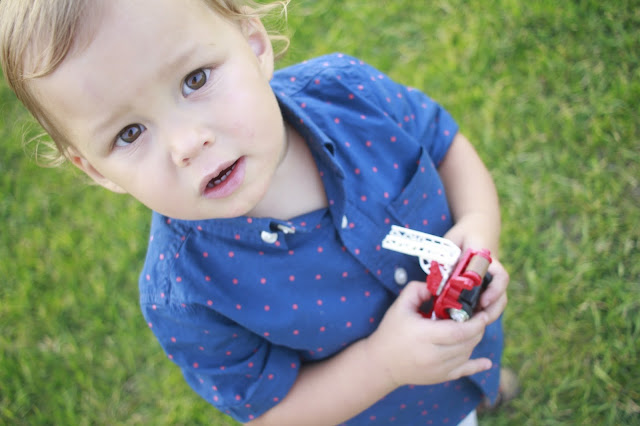 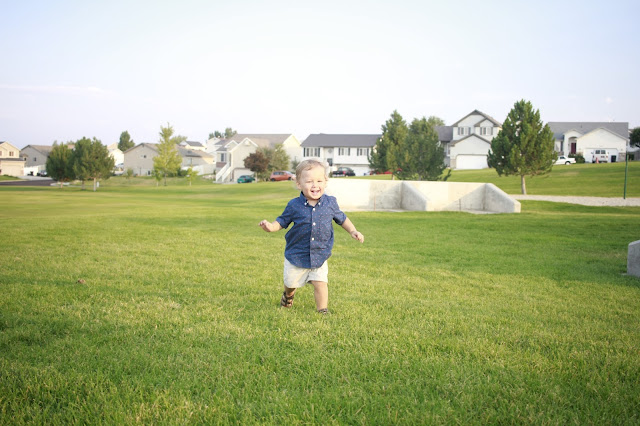 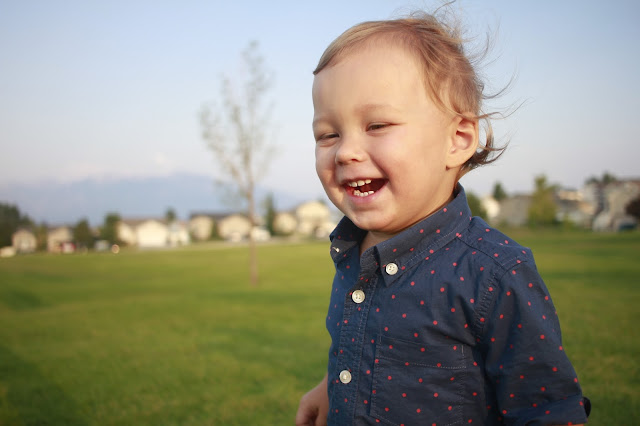 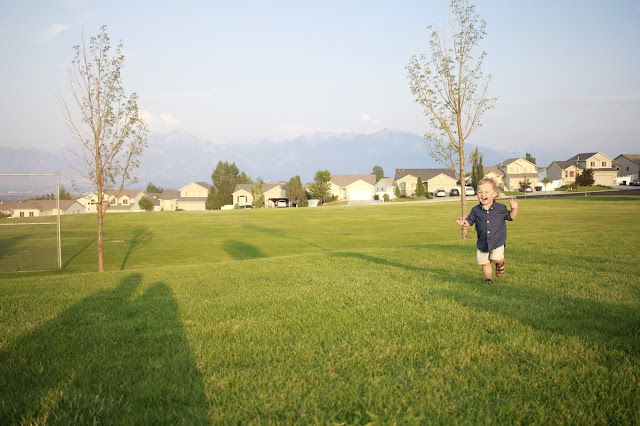 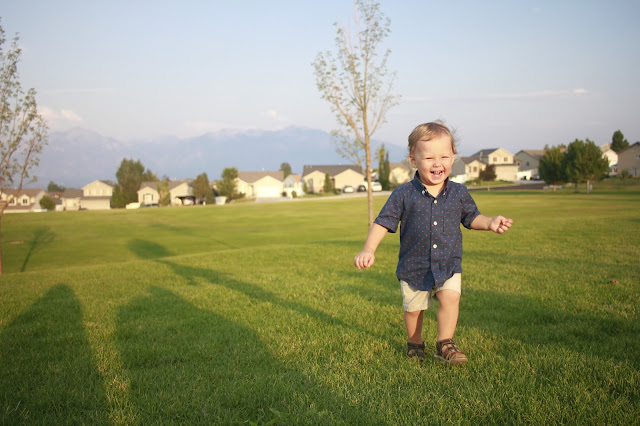 Meet "Hugsy". This was a gift for his 1st birthday. We like to think its his favorite stuffed toy, but let's be honest, it ends up in the corner of his bed for the most part of the night. We came up with "Hugsy" because we wanted a smooth way to lure Gabriel into bed at naps and bedtime. So our tactic was "God give hugsy a hug" all while Hugsy was in his bed. 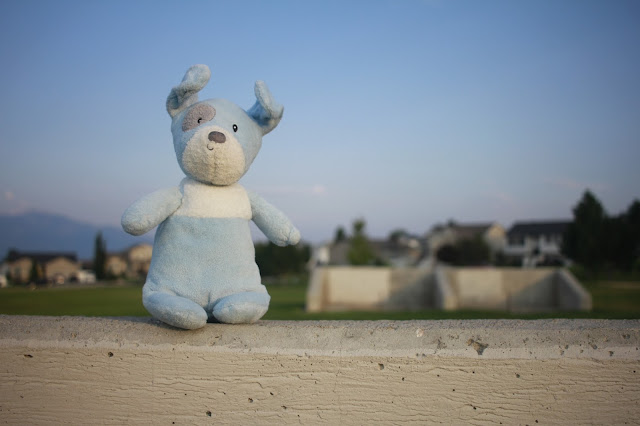 Gabriel fell in love with play grounds and just recently mastered playing on them. We're still a little scared when it comes to big kid playgrounds (like this one) but he seems to do well with staying away from un railed edges. 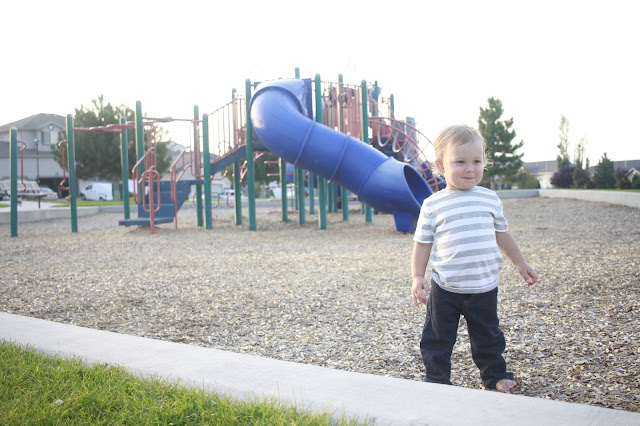 He just recently learned how to go down the slide and loves it so much. 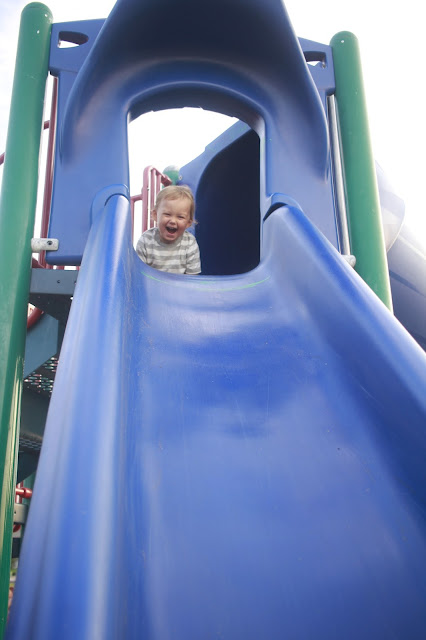 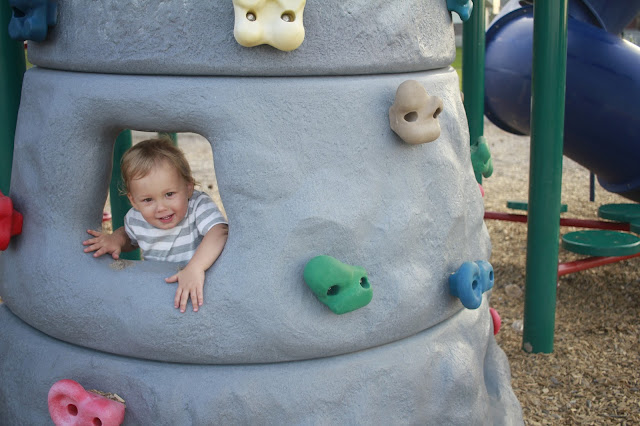 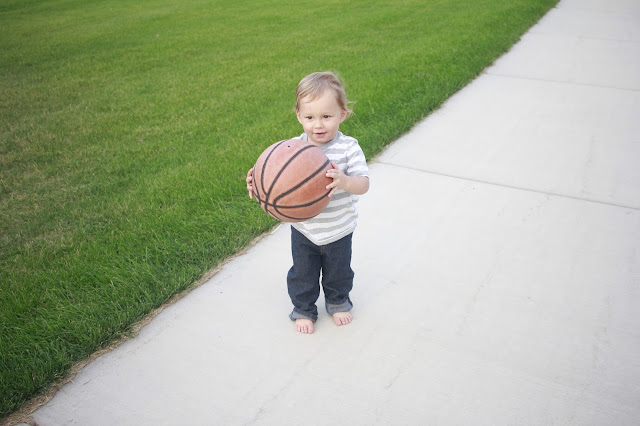 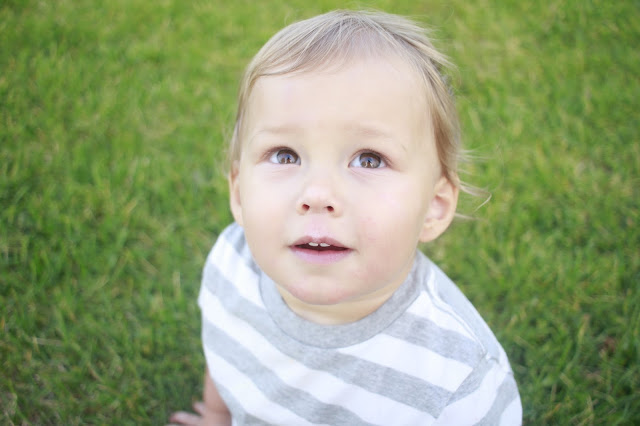 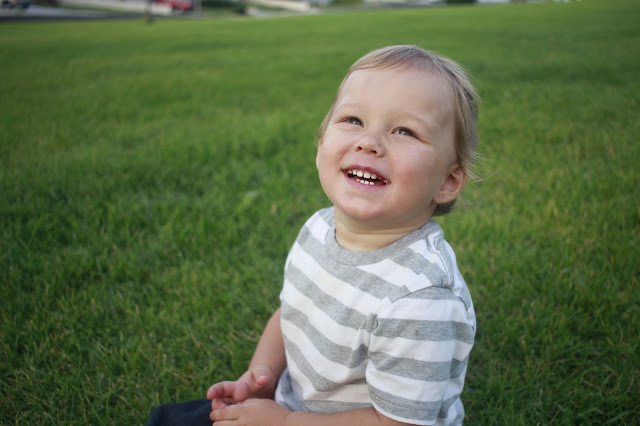 I'm pretty sure he gets his curly hair from me. When I was a baby, I had very curly black hair. Around 4 months, I had about as much hair as he does at 1.5 years old. He has never gotten a hair cut, and we don't plan to cut his hair anytime soon. Those curls are just too cute to cut 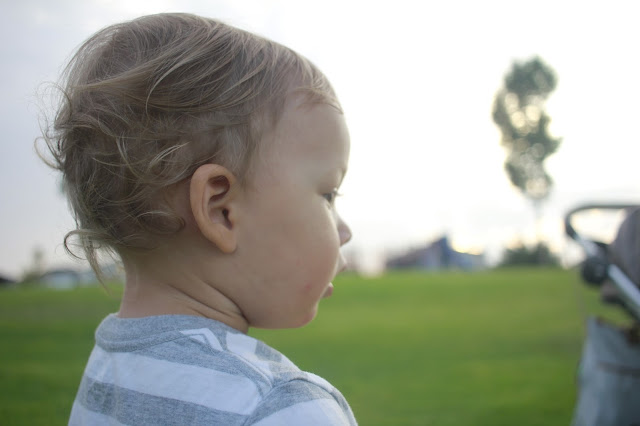 Even though he is a little boy and we all know little boys are mischievous,  he is also very affectionate. He will give random hugs (especially if we're holding Noelani (;  ) and random kisses.
At night we pray together and then give hugs and kisses. Some nights he will give up to 5 kisses, and would probably keep going if we don't tell him he needs to go to bed. That might also be his ploy to stay awake longer, even if its just a little bit (; 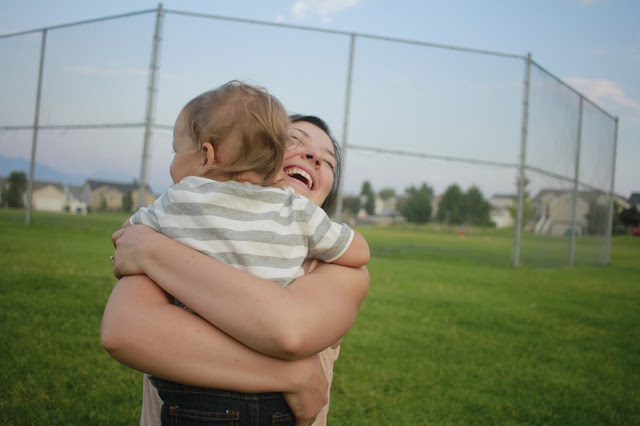 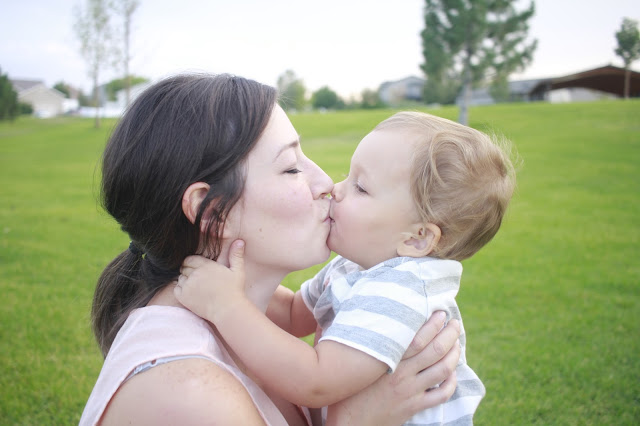 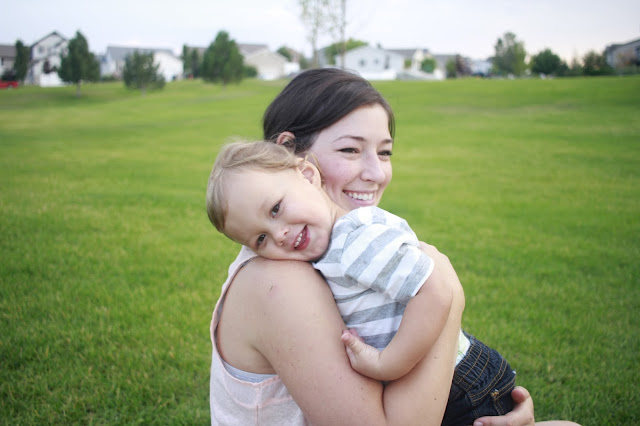 This last year and a half was wonderful, crazy, hectic, and amazing. I'm really excited to see how God will use Gabriel. Keep being your spunky little self, little one (=
Posted by Unknown at 11:25 AM